THE INTANGIBLES OF A MIX 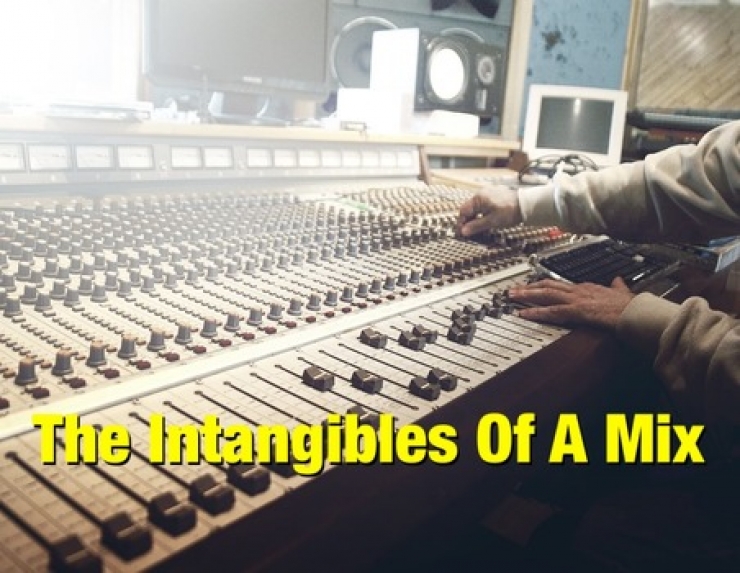 It’s easy to think that getting a good mix is just a matter of pushing up some faders, getting a reasonable balance, adding some effects, and you’re finished. Although that might work for a rough mix, there are still a number of intangibles that are vitally important to a great mix. Awareness is always the first step in learning, so here are some things to consider before you start to move faders around.

The Arrangement
It’s really easy to get caught up in just the audio portion of being an engineer, but unless you seriously consider how the music itself is put together (assuming that music is what you’re engineering, of course), your ultimate product probably won’t sound great no matter how good you are at balancing tracks.

Anyone with a little mixing experience has found that the arrangement is usually the #1 non-audio problem in a mix. In these days of unlimited tracks, it’s all too easy to pile more and more musical elements along with double and triple tracks of everything you can think of. You can easily wind up with a hundred tracks to wade through before you know it, and that gives you an impossible task of making it sound like something more than a wad of dense audio goo. A good producer will usually bring some common sense to the arrangement, paring things down to where they’re adding to and subtracting from the dynamics and intensity of the song, but sometimes the producer can also be the one demanding everything but the kitchen sink be added in. If that’s the case, if the songwriter doesn’t have an innate sense of arrangement (luckily many do), you’ve got a potential mixing mess on your hands.

That’s why it’s important that the mixing engineer be aware of some basic music-arrangement principles, which we’ll cover in Chapter 5, “The Balance Element,” because a big part of being a mixing engineer is knowing when to mute things and knowing just what elements need to take precedence at a certain part of the tune.

Good balance actually starts with good arrangement, so it’s important to understand arrangement because so much of mixing is actually subtractive by nature. This means that the arrangement, and therefore the balance, is changed by the simple act of muting or lowering the level of an instrument whose part doesn’t fit well with another and doesn’t help the dynamic envelope of the song. If the instruments fit well together arrangement-wise so that they don’t fight one another rhythmically or frequency-wise, then your life as a mixer just became immensely easier.

The Performances
Back in the ’50s, ’60s, and ’70s before recording and production techniques rose to the sophistication of today, a shaky performance by a player or singer could pretty much be accepted in the context of the song. With most players only getting a few takes at most to capture a part, the performance was evaluated more on feel than on precision. Today’s production techniques have evolved to the point where precision and feel are equally in demand during a performance, and as a result, the average listener has evolved to unconsciously expect that as well.

Shaky performances that are out of tune and rhythmically out of time can sometimes work if the mix is incredible, but usually only if the rhythm section is solid. One of the reasons why a mixing engineer has a huge box of tools, such as pitch correction, sound replacement, compression, and copy and paste editing, is to help fix or enhance performances so they’ll make the mix fit together better. That said, there’s a limit to how much a performance can be artificially helped before it sounds unnatural, which negatively impacts the mix as well. Like so many other elements given to the mixer, the better the performances, the better the mix will sound.

The Point of Interest
Every song has something that’s the main point of interest or something so compelling that you can’t take your ears off it. If it doesn’t, send the song back to the drawing board. It’s not complete.

Although having control over the first five elements mentioned earlier may be sufficient for many types of audio jobs and might be just fine to create a decent mix, most popular music requires a mix that can take the song to another level. Although it’s always easier with great tracks, solid arrangements, and spectacular playing, a great mix can take tracks that aren’t particularly special and transform them into hit material so compelling that people can’t hear enough of it. It’s been done on some of your favorite all-time songs.

So how can we get to that point?
More than being just technically correct, a mix must be as interesting as a good movie. It must build to a climax while having points of tension and release to keep the listener subconsciously involved. Just as a film looks bigger than life, a great mix must sound bigger than real life. The passion and the emotion must be on a level where the listener is sucked in and forced to listen.

Even though the most important element is often the lead vocal, it doesn’t necessarily have to be. It could be a riff, such as from the Rolling Stones’ “Satisfaction” and “Start Me Up,” or the intro to Coldplay’s “Clocks,” or the rhythm on the verses of Arctic Monkeys’ “I Bet You Look Good on the Dance Floor,” or Lady Gaga’s “Born This Way.” It’s always a part so compelling that it forces you to listen to the song.

You can read more from The Mixing Engineer’s Handbook and Bobby’s other books on the excerpt section of bobbyowsinski.com.