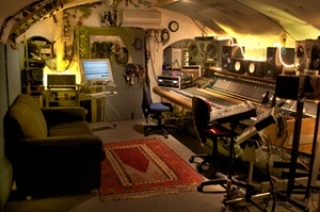 Toybox is based in a leafy Georgian Square in Central Bristol. Combining the best of analogue and digital equipment, as well as a huge selection of instruments and toys it was originally designed in 2000 by Andy Allan (Coach House Studios) and has blossomed into a favoured workplace for artists as diverse as PJ Harvey, Mark Ronson, M Ward, Seasick Steve, The Kills, Kool Keith, ATP Festival, Future of the Left, Howe Gelb, Gabby Young and Gravenhurst. The studio is also regularly used by producer / musician John Parish and in-house producer/engineers Ali Chant and Stefan Hambrook who have nurtured the studio from its beginning.

Ali told us, ‘Toybox was inspired by Rockfield Studios where musicians can play together in the same space but with complete isolation for amps and instruments available. We have a large dead room, partially floored with solid maple for a rich deep drum sound, which is separated from the main space by four isolation booths but which still allows performers line of sight into the room. The large stone room, with arched stone ceiling and adjoining lobbies, has a lively, bright and airy acoustic making it well-suited to recording huge Albini / Bonham-esque drum sounds. It also has moveable curtains and screens with ample space for live tracking of many other musicians. A smaller ‘cave’ stone room houses a Challen baby grand piano and also acts as an excellent reverb chamber.

‘Our large control room centres around a 40 channel Trident TSM console which is tied through to six different recording rooms. It can comfortably accommodate a band as well as a producer and engineer. Recorders include an Otari MTR90 Mk II with Dolby A and Pro Tools HD2 (32 I/O). We offer a great selection of mics including Neumann, Coles, AKG, Groove Tubes, Electrovoice and Telefunken and our instrument collection includes gems such as Yamaha and Challen pianos, a Fender Rhodes, two Hammond organs with Leslies, drum kits, amps, guitars, pedals, percussion, synths and accordians. Our full mic and instrument list can be found here on our website.’