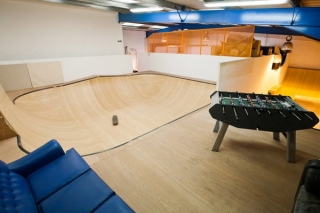 When it comes to getting the flow right, many studios try, but very few manage to capture the essence quite as well as the recently re-christened The Park Studios in Wembley, NW London. Previously known as Sub-Bubble, and with a new website due to launch on Monday (1st October), the complex has been operating for about two and a half years, with an ethos of providing high-end equipment at budgets accessible to everyone. Producer and engineer Mike Hillier visited the studio for us last week and was given a tour of the facilities by in-house engineer Tobin Jones, who joined the studio in 2010.

“We’ve got one main studio with a live room, and a smaller production room with a vocal booth. Everything is tie-lined so you can connect to any room from any other. We’ve also got a lounge downstairs with a grand piano, which is a lovely recording room, and that’s tie-lined too. These are the studio’s main recording areas but there are other parts of the building we can use as well, like the skate park, which sounds fantastic, and even occasionally gets used for skating! We’ve also got a green-screen studio for filming and another production room downstairs which is hired out on a long-term basis.”

The main studio houses an SSL AWS 900+ SE console alongside an enviable collection of analogue gear. Tobin explained, “The main bits we use for recording are the console, the four Lunchbox 1073s and the API 3124 preamps. I tend to use the APIs on guitars and kick/snare. I don’t even take the labels off any more as I pretty much use them on the same thing every time. I do a lot of full-band recordings and generally favour the Neve and API preamps over the SSL but when everyone’s playing together everything usually gets used in the end.”

When recording Tobin puts the various spaces in the complex to good use, combining the best of the live room with ambiences from the skate park and warehouse out at the back of the complex. The skate park is on a mezzanine in the warehouse and comprises a large bowl and a half-pipe, providing reflections not only from the wooden bowl, but also from the warehouse itself. Tobin added, “If I’m recording drums in the live room I like to wedge open all the doors and stick a mic out in the skate park just to capture the spill. I tend to put a U87 set to omni on the steps up to the skate park to get a blend of the warehouse as well as the wooden bowl sound. Then when I come to mix I can have that ambience if I want it. I really like things that are unique, that no-one else can replicate. I think it’s important for studios to have spaces that are individual like that.”

Tobin doesn’t just use the skate park for ambience, he’ll often use it as an additional recording space. “Drum overdubs sound incredible out there so if we need any big rolling toms that’s where we’ll record them. Usually I’ll put two kick drums on their side and we’ll play them as if they were kettle drums. I’ve even recorded a choir and a brass session which sounded amazing. It’s a really unique space with a great presence you can add to any recording, particularly if you get to a point where something is missing, or where the drums need to sound bigger or just when you need something to lift. The natural reverbs are incredibly beautiful, which is why I set up a PA to allow me to re-amp through the skate park at any time, just to get the sound of it. I don’t tend to use many mics, typically just a U87 in the bowl set about a metre from what I’m recording and then a stereo spaced pair of Royer ribbons at the top of the park to get as much of the natural sound as possible. I might even use a Blumlein but I’ll keep the mics quite far apart.”

The Park’s backline boasts some great vintage amps, including a 1968 Ampeg B15N Flip Top and a ’70s Marshall JMP Master MkII. There are also some more modern amps including an Orange Tiny Terror. Tobin told us, “I don’t think I could work on bass guitar without using the Ampeg any more. It’s instantly everything you want from bass, full and deep, yet warm. I tend to use an RE-20 about a fist away and an MD421 a bit further back. I generally don’t take a DI feed from the bass unless I’m not mixing the session, as I get everything I need from the amp. An exception is if we’re doing a heavily effected sound on the bass so I can have something clean to re-amp if I need it. For one of the projects I’m working on at the moment I’ve been taking a DI of the guitar signal, as the band doesn’t have a bassist, then tracking the guitar with a DI and de-tuning it and re-amping that back through the bass cab to fill out the low-end.”

As well as the desk and preamp collection the main control room houses an eclectic range of gear, including a large Analogue Systems RS8500 modular synth. “The synth is amazing but, as it’s fully modular, it does take a long time to work up a patch. More often than not it gets used for processing and running things through when mixing, like layering up weird snares or vocal effects. Anything a bit unusual and different. When I’m tracking I try to record things as hi-fidelity and as clean as possible and then when I mix I tend to go the other way and use the Copycat, the Space Echo or the WEM (AudioMaster) which is a 1970s PA mixer. Each channel sounds completely different so I use that a lot on kicks and snares in parallel with the original. It can really punch through the mix but it can also be quite noisy and behaves differently on different days. It’s got a mind of its own really!”