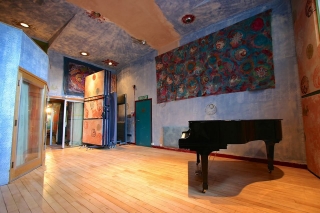 Strongroom is a name familiar to many producers and engineers, having been at the centre of the London recording scene since it opened as a single studio in the mid-eighties. However, in 2015 Strongroom has now expanded to offer not only three main commercial studios, but also ten dry hire studios, a bar/restaurant, and offices which are home to the likes of Bella Union, Secretly Canadian, 37 Adventures and Wichita Recordings.

Built on a reputation for technical excellence, outstanding customer service and good vibes, the studios have produced countless hits over the years for a list of clients from Nick Cave to the Spice Girls, Emeli Sande to Skrillex (detailed client list here), each drawn to Strongroom’s comfortable, professional, and yet slightly anarchic, environment.

Studio Manager Phil Sisson told us, â€œThe main studios have been busy recently. In fact, last year was the best weâ€™ve had for as long as I can remember! We had a great bunch of regular clients and some really fantastic projects. David Wrench completed the Caribou, FKA Twigs and Jungle albums here, Oliver Wright did the Idris Elba album in Studio 3 and we finished the year with Slaves recording their album in Studio 1 with Jolyon Thomas, and Bjork in with The Haxan Cloak and Arca in Studio 4.”

There are now plans to capitalise on this success, with improvement works planned for 2015, Phil explained, “We have already started by removing the pillar (pictured) from the live room in Studio 1, which will make a real difference for tracking sessions. Weâ€™re also looking at adding a couple more booths and changing the layout in the control room to make it more comfortable and spacious. It feels as though studios like ours have come through a tough patch and are now in demand again, so being able to plough something back is a major achievement and our clients will reap the benefits.â€ Studio 1, the largest of the main rooms, is centred around a Neve VR60 Legend; Boxer 5 / Chevin monitoring; 48 I/O Pro Tools HDX2 and Studer A800 2â€ and Ampex ATR100 Â½â€ analogue tape machines. There are two EMT plate reverbs and a generous outboard selection featuring choice pieces from API, Neve, Thermionic Culture, TubeTech, and Urei. The double-height live room with isolation booths and a Kawai grand piano makes the studio an excellent choice for both recording and mixing projects.

With Studio 2 currently on long-term let, the next largest space is Studio 3, which houses a recently fully-recapped SSL 4056 G+ console; Boxer monitoring; Pro Tools HDX2; Ampex Â½â€ tape machine EMT plate and an enviable selection in the outboard racks. (Full spec here.) â€œStudio 3 was designed primarily as a mix room,” explained Phil. “Its ability to deliver top-end results has been proven again and again over the years, and it is cited by many as one of the best-sounding rooms in London. Thereâ€™s also a decent sized live room and an isolation booth, which makes it a popular choice for vocal and overdub recording, as well as small band projects.”

Fully refurbished in 2013, Studio 4 is a joint venture with producer/engineer Danton Supple and is a very versatile space, equally well suited to mixing as to writing and recording. An ex-BBC Calrec Q-Series console can be used either in the traditional way or as a Pro Tools summing mixer, and a range of high-quality mic amps and compressors (Neve, API, Manley, Chandler, Summit, SSL etc) provide a comprehensive set of options.

In the live area thereâ€™s a Challen upright piano and a second Pro Tools rig set up as an editing workstation. A collection of mics and toys amassed over 30 years is available to studio clients, including a Telefunken 251, a Neumann U67, a pair of U47 FETs, an AKG BX25 spring reverb, two MiniMoogs and a â€™78 Precision Bass. See full list here.

Strongroom’s studios are maintained by two full-time in-house techs; sessions are kept ticking along smoothly by a small roster of experienced engineers and assistants and a dedicated management and bookings team. For more information about the studios or to make a bookings enquiry, please contact Strongroom via their listing.