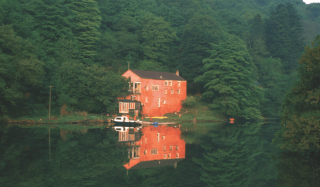 The landscape of studio recording has always been a shifting and mutable one, and never has this been more true than today with the rise of home recording and rampant piracy. But there remains a stalwart bastion of studios waving the flag for the classic generation of recording, and Sawmills Studio is one of them.

Founded in 1974 by record producer Tony Cox on the banks of the idyllic River Fowey in Cornwall, the studio is one of a diminishing number of residential studios in the UK.

From then till now
It’s been a stop-start journey for the studio through the decades, but it has always gone from strength to strength during its working years.

‘It was an active period from 1974 to 80,’ explains record agent and current owner Dennis Smith. ‘Then Tony Cox sold Sawmills to his engineer Simon Fraser who used it as a family home and musical workshop. It remained commercially dormant until 1983 when Simon wanted to relaunch the studio. We reopened with new equipment that I introduced during 1985 as a partnership.’

In 1987, legendary record producer and engineer John Leckie worked in Sawmills Studio for the first time. Having worked with artists from John Lennon to Pink Floyd, Leckie has continued to be involved with various Sawmills projects over the years, including production of Muse’s first album Showbiz and the now-revered follow-up Origin of Symmetry with producer Paul Reeve, mixed by regular sound engineer John Cornfield.

Smith continues: ‘By 1992, the market was dead for studios, Simon wanted to sell up, and offered his half of the business and the property to me. So what did I want to do? I decided to buy him out. It was a big gamble, but it paid off. Within two years we had recorded Definitely Maybe, the Oasis debut, and we signed a production deal.’

With that, Sawmills had cemented its destiny at the centre of the Britpop movement, which also celebrated an anniversary in 2014 – 20 years since its inception. The studio would go on to record a number of key artists in the genre, brandishing an influence on UK music that extended into the new millennium.

‘We have offered numerous production deals,’ Smith continues. ‘The most notable successes to date have been Supergrass and Muse, who have grown to become one of the biggest bands on the planet today. We’re happy to take just a little credit for that achievement!’

Artist’s Retreat
Being such a sequestered retreat for artists, Sawmills has acquired an eminent reputation thanks to a combination of its prodigious output and unique qualities, as Cornfield notes: ‘People were aware of Sawmills from the early days, this studio down by the river, and it always seemed like this kind of mystical place – which it is, it’s in a fantastic location. I think the uniqueness comes from the atmosphere and the people, and the atmosphere is created by the place – down by the river, it’s beautiful and stunningly serene.’

Smith believes that this provides an escapist quality that proves conducive for an artist’s work: ‘I think there has always been people who insist on an aesthetically pleasing environment. Being so isolated keeps the artist focused, and it gives an element of privacy. We’ve never been a truly industry place. We’ve never put gold discs around the walls. We’ve always felt that people want to get away from that.’

Classic Collection
While the aesthetic environment of the studio is responsible for a large part of the sound and success it has produced, its other ace in the hole is its arsenal of vintage gear. Cornfield explains: ‘I got involved around 1981 or 82, and there was still the same basic setup as there was when it first opened. We originally had a 16-channel Sound Techniques desk which had been expanded by another eight channels on the end, a pair of Tannoy HPD monitors, a Studer A62, Revox A77 and an Ampex MM1100 – so it was quite sparse.’

And that key arsenal hasn’t required much expansion or modernisation: ‘The essential layout of the studio is pretty much the same – the monitors are different, we’ve had Quested 212s since 1985 or 86. We also have an Ampex ATR and the EMT Plate is still there, in a separate room. And, of course, there’s computer screens everywhere now, like every studio.’

In 1986, the studio acquired what has become its centrepiece, the Trident 80B console, which, as Smith notes, ‘still remains our console of choice’. Cornfield comments: ‘We’ve added another 24 channels to the Trident console, making additional circuit boards on a metal plate. We added automation to it, which we did on a BBC microcomputer. Trident mic amps are quite noisy so we designed our own, which we put in a select few channels for where we needed low noise.

‘It’s got a sound that I personally love! It’s a got a really fat bottom end and total clarity, which is something I miss when I’m not recording with it.’

Digital Shift
A quintessentially classic studio, Sawmills has still had to keep up with the advance of technology and the emergence of standard recording practices; Smith explains that the studio has carved its own niche here, like it has in every area, by swimming against the tide: ‘We’ve always been an advocate of Soundscape rather than Pro Tools as a reliable and sonically better system,’ he reveals.

When asked if he would agree, Cornfield immediately replied: ‘Absolutely. In the mid-90s when it became apparent that you needed to make this jump to a Pro Tools system or a Soundscape system, I listened back to everything and went ‘Wow, Soundscape just sounds like the tape, but without the fuck-ups’. I grew up with Soundscape and personally I still prefer the sound of it. I can work in Pro Tools but I prefer to work in Soundscape because of the workflow.

‘Things have changed but I still approach it in exactly the same way – in a very analogue way. I still run my system very much like a tape machine.’

Smith recalls: ‘When we went to record Muse for their first live DVD Hullaballoo, which John recorded and mixed at Sawmills, we recorded the whole thing on Soundscape rather than Pro Tools. They recorded over two nights spotlessly and without a single dropout. The engineers running the mobile were most impressed with the trouble-free operation of this alternative recording platform. Nobody else had done it at that time.’

When it comes to building on the studio’s stellar successes in the past, Smith and Cornfield both agree that the path forward is clear: to carry on with the winning formula. As Smith notes: ‘We don’t have plans for expanding the studio. Our view is that if it ain’t broke, don’t fix it.’