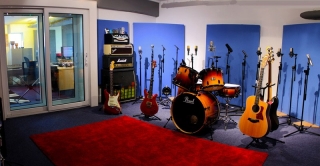 “A nice vibe, the premises are spacious and comfortable and most importantly it all sounded great. Sam did a great job engineering. I’m sure I’ll work there again!â€ Andreas Olsson, Producer

Price Studios in Battersea, is a brand new addition to the London studio scene. Situated in the old Price’s Patent Candle Factory on York Road next to the River Thames, and adjacent to Battersea heliport, the studios are easily accessible from South West London and just a ten minute walk from Clapham Junction station.

Following the complete refurbishment of the empty building (commissioned by owners The Entertainment and Media Group), the first rehearsal rooms reopened for business early last year. These were mostly used for West End Musicals and prime-time TV shows but went on to host rehearsals for X-Factor and Britainâ€™s Got Talent, together with award-winning shows like A Beautiful Thing andFame. In August more studios, including the revamped and updated recording studio, were also opened to meet increased demand.

In-house engineer and producer Sam Featherstone, who was brought on board to get the recording studio up and running and to upgrade the existing studio equipment, told us about some of the key purchases as well as the work undertaken throughout the complex.

He explained, â€œAndy Thompson, the studio’s general manager, was tasked with turning the shell of the existing rehearsal studio complex and recording studio, into a creative hub combining recording, rehearsal and production studios. He employed a highly skilled team who have successfully worked together to make Price Studios one of the most sought after studios south of the river today.

“With the recording studio, we wanted to provide a modern, comfortable and professional space, which would be both flexible and accommodating. We chose an SSL Nucleus running a 32 channel Pro Tools HDX system to take centre stage in the control room as this would facilitate straightforward, hands-on control of all modern DAWs. Monitoring is via clean and passive SPL MTC 2381s and a set of PMC TB2SAs, a combination perfectly suited to the room. We also have a selection of Universal Audio, Focusrite and SSL preamps.

“The live room, which is the same size as the control room (a spacious 236 sq ft) comfortably allows for the recording of large bands, quartets, voiceovers and demos, using custom made baffles/gobos that allow the room to be divided up appropriately, depending on the application. For example, separate vocal booths can be created for voiceovers and vocal recording making the studio ideal for single, EP and album projects as well as voiceovers, mixing and songwriting. Our small, but perfectly formed list of backline includes guitars from Fender, PRS and Taylor; drums and cymbals from Pearl and Zildjian and amps by Marshall, Fender and Ampeg. The mic cupboard boasts a selection of AKG, Shure, Rode and sE Electronics microphones and we have a beautiful vintage Roland Jupiter 8 together with a selection of other midi keyboards and controllers to complete the setup”.

Over the past few months Price has been attracting clients from a variety of sectors. Classical Brit stars Blake and Camilla Kerslake, rock and pop singer-songwriter Charlie Simpson and veteran pop stars Dane Bowers and Gareth Gates have all spent time recording here. Brazilian singer Thiago ThomÃ© also recorded ITVâ€™s theme tune for the 2014 World Cup here, a song that is heard by millions of people every game! Other clients include a number of unsigned and up-and-coming music artists, many of whom have benefitted from the studioâ€™s special unsigned rates. Sam is keen to attract new bands and artists to the studios, and help them achieve a well-produced sound without breaking the bank. You can hear some of his work by scrolling halfway down this page.

Additional features on offer at Price include a 13m x 9m rehearsal space with professional sprung floor perfect for all dance and theatre rehearsal needs; a casting and filming studio; a photography studio with in-house backdrop and lighting kit available; tall ceilings and natural daylight throughout the building; kitchen and green room; wi-fi; daily catering on request with delivery service included; shower facilities; parking on request and a five minute walk from Battersea Helipad.

To find out more about Price Studios or to book a session please contact Sam here.