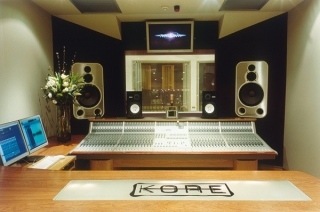 ‘Not too small, not too large, but perfectly formed. Wonderful collection of mic pres and microphones, good solid British sound and great line of sight for those that care!‘ Chris Kimsey

Kore Studios, in the heart of West London is a purpose-built, high end recording studio opened by producer George Apsion in 2004. As a testimony to the standard and quality of service offered at Kore, the studios recently received international recognition when they were awarded the title of ‘Best Studio’ from the UK Music Producers Guild Awards in 2010.

George told us, “Over the past eight years Kore has gained a reputation as one of the most technically accomplished and reliable recording spaces in the UK. The studios are arranged over two floors, with Studio 1 occupying the ground floor and Studio 2 on the second. Studio 1 offers a large, 42sq m tracking space, with a generous 4m ceiling height and two additional iso-booths. The room is extremely versatile and can accommodate anything from a full band to medium-sized string ensembles (16 players). There is natural daylight, a Chappell upright piano and personalised headphone mixers for players to build their own balances. Further ambience can be added to the room, simply by opening the doors and positioning mics in the adjoining brick corridor.”

The control room in Studio 1 houses a 48 channel Audient console and Pro Tools HD/Radar multitracks. George commented, “The Audient is extremely reliable, quiet and configurable and doesn’t force its own sonic signature onto the signals. In that regard it serves as an exceptional monitor path and perfect complement to Kore’s biggest client draw, a sizeable inventory of outboard mic preamps. At the last count there were 48 which included 12 vintage Neves (1081 / 1073 / 31102s), 8x Tweeds as well as units by API, Chandler, Universal Audio and Shadow Hills. There is also a fantastic range of compressors on offer, meaning that you are well covered for both recording and mixing sessions.”

Main monitoring is provided by Exigy with Yamaha NS10 and Pro Ac nearfields running on Bryston / Quad amps. Kore’s microphone collection offers the usual studio standards, highlights of which include a gorgeous pair of Neumann U67s, and some very rare and esoteric vintage mics (ribbons by Melodium, Altec, Bang & Olufsen and Toshiba) plus a selection of lo-fi FX mics by the likes of Placid Audio and Cadenza.

Up the stairs and next to the large sitting room you will find newly opened Studio 2. George told us, “The centrepiece of this room is a gorgeous vintage 1978 Tweed Audio console. For those not familiar with this brand, Tweeds were built by ex-Neve engineers and share many Neve characteristics and sonics, including Marinair transformers and a thick, punchy EQ. This room has become extremely popular for mixing, as the combination of the Tweed’s rich summing amps and the Prism converters we offer, give any recording passed through it that instant glue and ‘finished’ quality.”

Kore’s client base includes acclaimed artists and producers from the UK and Europe. Ronnie Wood, Florence and the Machine, Feeder, The Enemy, Plan B, Scott Walker, Ray Gelato, Z Management and The Saw Doctors are just a few of the high profile names who have benefitted from Kore’s relaxed and creative environment, backed up by a superb collection of rare and eclectic recording equipment and impeccable service and maintenance.

For a video tour of the studio follow this link to a beautifully shot promotional video. The studio’s contact details can be found here.