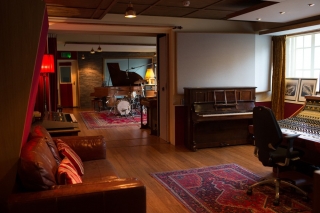 Hoxa HQ, situated in Londonâ€™s vibrant West Hampstead, is a beautiful boutique studio complex tucked away behind a fire station in West Heath Yard. Originally the stables for the fire station horses, the yard has also been home to a recording studio since the 1960s, with previous tenants including Edwyn Collins and Alan Parsons.

In early 2015, Grammy Award-winning songwriter/producer Jimmy Hogarth (Amy Winehouse, Sia, Paolo Nutini, Duffy, Corinne Bailey Rae, Ren Harvieu, Estelle, James Bay, KT Tunstall) took on the tenancy after moving out of his much loved, long term premises on Kilburn Lane. Jimmy explained, “The room I had in Kilburn started as a writing space, but it filled up with the equipment Iâ€™d bought over the years as I did more production work. I felt it was time the gear had a proper studio home!”

Jimmy explained, “The brief was to build a space which had the same feel as the Kilburn Lane studio but which could be more practical when needed. One of the things I loved and hated about my old place was that everything was all in one room â€“ there was no separation. It was great for certain things but difficult when isolation was required. Here at Hoxa HQ we’ve now got the best of both worlds, with two independent, large, sliding glass doors which can be closed to create excellent separation between the control and live rooms. Added to that, the other two booths and amp enclosures give full band isolation if needed.

The entire Hoxa HQ complex is flooded with natural light and has the air of a library / gentleman’s club. The main studio centres around a beautiful Neve 8058 MKII console which, Jimmy told us, â€œwas commissioned by the Canadian Broadcasting Corp in 1973. Having spent the first period of its life in a mobile truck, broadcasting live sporting events, it was then sold to Randy Bachman (Bachman-Turner Overdrive) who had it renovated by John Vrtacic and added the Canadian Redwood to the exterior. I then bought it from Randy and had it shipped back to London (all the way round the Cape of Good Hope!) It has since been maintained by Blake Devitt and has a very clean bill of health.”

Monitoring in the main studio is via Boulder MKII’s; ProAc Studio 100s and Focal Solos with recording undertaken via Pro Tools HDX or the Studer A800 analogue 2â€ tape. There is also an abundant selection of outboard to choose from.

Since September, when the studio renovation was completed, Jimmy has been busy making a record for new Virgin signing, Stevie Parker. “It’s been great to finally see all my equipment in an environment that utilises its full potential. We recorded full band sessions for Stevie to 2â€ 16-track tape with Dolby SR, and then transferred the recordings to Pro Tools for editing. Everything worked beautifully, and sounded just great.”

Hoxa HQ is now also available for hire to out-of-house producers and engineers. Rental of the main studio includes an in-house assistant, whilst engineers can be arranged by request for an additional fee. The studios are only five minutes’ walk from West Hampstead tube, overland and Thames link with a huge assortment of restaurants, bars, and cafes in the area catering for all tastes. To find out more or to make a booking please contact the studios via their listing.