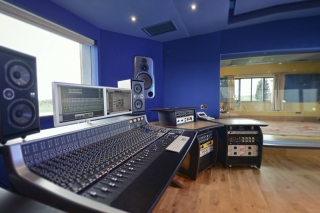 The Northamptonshire countryside may not be the first place you would think to look for a top-notch recording studio, but Far Heath, Angus Wallaceâ€™s recently upgraded residential facility, is one good reason to investigate this secluded spot when booking your next session. Surrounded by miles of walks, country parks, canals and substantial areas of ancient woodland, and with accommodation for up to six people (including a lounge, kitchen and bathroom) Far Heath offers not only a unique location but also, in Angus’s words, “a different, more relaxed feel. There are no stresses. Mobile phone reception is bad so there are no interruptions. Itâ€™s a wonderful rural seclusion.”

Offering recording and tracking, mixing, mastering, sound design, and recording courses, Far Heath has come a long way from its humble beginnings twenty-six years ago when Angus began recording a friend’s band from the annex of his house. He was 18 at the time and since then he has slowly built the studio up from an eight-track to a 16-track reel-to-reel to the well respected, state of the art facility he runs today.

Far Heath is perfectly set up for live bands. It offers a wide selection of vintage mics; various live areas including a drum booth with a 12ft ceiling; a 24-input Solid State Logic AWS 900+ console; and monitoring via Exigy 515s and Focal Twin 6s. Award-winning UK acoustic and technical designers White Mark designed both the control room and the live room. â€œThey raised the ceiling and worked out how it was going to sound best with oak flooring and a huge window that overlooks it from the control room,â€ says Angus. â€œWhite Mark were excellent!. Very professional. They did the wiring as well. I think they did a cracking job and Iâ€™m very happy with it. The main reason I did the whole upgrade was to improve the monitoring in the control room, which now sounds gorgeous, and then it sort of snowballed a bit from there.â€

A recent upgrade to 32 I/O Avid Pro Tools HD Series interfaces, replaced the older Digidesign 192 I/Os. â€œI used Studio Creations to help me go through a lot of different interfaces,â€ Angus explained, â€œas I wanted to increase our spec from 24 inputs to 32. Iâ€™d heard that these Avid interfaces had a richer tone and they definitely do sound much better. Iâ€™m very happy with everything that goes through them now. Pro Tools 11 is also on the list, probably for later next year.â€

Two vintage Neumann mics, a U67 and an M49, have also been added to the spec, plus a pair of Schoeps Colette condenser mics with MK 4 capsules, and a vintage EMT 140 Classic Plate Reverberator which was originally commissioned for Polydor before it went to Chapel Studios in Lincolnshire. Angus told us, “This EMT has seen a lot of action over its life, with Jimi Hendrix, Cream and The Who just a few of the musicians who have recorded through it. We also purchased an API 500-6B six-slot lunchbox which I suspected might be just a fad until I tried some out and discovered that theyâ€™re absolutely stunning. The quality of what comes out of them is fantastic. Iâ€™ve also got a stereo set of AEA RPQ500 pre amps, which are really built for ribbon mics but they sound great on the condensers too.â€

Far Heath boasts a superb client list which includes The Prodigy recording drums with producer Neil McLellan; Spiritualized working on their Lazer Guided Melodies album; The Fall; guitarist Albert Lee; Shane MacGowan & The Popes; Love and Rockets; and Wishbone Ash. Angus remembers Liam Howlett of The Prodigy as an excellent drummer. “He also had a fantastic turbocharged car that used to make a squealing, honking noise as it raced off. People were thrilled to hear this weird monster machine he was driving. Then there was Mark E Smith from The Fall who once woke up the whole studio at three in the morning. He was trying to open a tin of Spam by smashing it with his shoes. Not to mention ex-Bauhaus band Love and Rockets who set fire to the live room while trying to perform a witchcraft spell during recording.â€ Most recently, the studio has hosted sessions for Grammy Award-winning producer Ken Nelson and Neville Staple from The Specials both of whom are working on new projects. Angus is also currently recording two songs with singer songwriter Peter Conway for a British Film to be released early next year.

To find out more about Far Heath or to enquire about booking the studio click here.