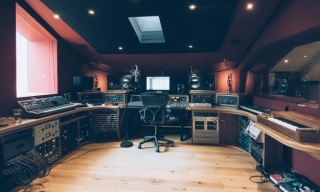 Building a recording studio from the ground up is certainly no mean feat, but when two great visions come together, the results can be spectacular. Colby Ramsey discovers how a rural facility in the North of England has produced just that.

At the time of writing, a newly-modernised recording studio tucked away in the idyllic village of Ripponden in West Yorkshire is preparing to reopen its doors to clients following a massive overhaul.

Joss Worthington’s Distant City Studios has been closed for the past year for refurbishment, with studio design and build company Studio People taking the reins for the extensive project. Despite its locale and appropriate titling, Distant City is still within close proximity to big cities like Leeds and Manchester. For a number of years, local bands have brought the area’s strong folk music scene to Worthington’s doorstep, choosing to record their material at his facility.

Worthington, who took over the studios around 13 years ago, has in fact been putting out his own material for the last four years as Postcards From Jeff, including an EP and an album. “I’ve got some background in film and have done a bit of soundtrack work, so the music I produce is quite cinematic,” says Worthington. “This actually helped draw some attention to the studios, including that of Blackpool four-piece band The Membranes. I did their album in 2015, which was rather well received.”

It turns out that Worthington’s ownership of Distant City came about somewhat accidentally. While visiting the studios on a regular basis as a musician, he quickly formed a partnership with its previous sound engineer, whose role he eventually assumed.

“I just got more and more involved with the scene as time went on, and as a result of that I began to realise some of the acoustic problems that the studio had,” he recalls. “There’s quite a bit of industry in this little village now and it has become a bit of an issue. I’d always dreamed about doing things from scratch in my own way, and was very keen to build the studio with my own vision in mind.”

John Holmes, Studio People’s technical solutions manager, adds: “Joss first got in touch with us after he found our website and at the time, we were on projects along the M62 corridor between Manchester and Hull so an initial on-site visit was arranged swiftly and proposals starting appearing from that point onwards.”

“When I got talking to Studio People,” continues Worthington, “I soon realised that this was a once in a lifetime thing to do on such a grand scale, and to do it all at once. I wanted to integrate the downstairs areas as much as possible and that’s when the crazy ideas started coming.”

Perhaps the craziest idea of them all was a motorised acoustic drop ceiling that Studio People specified to allow for a double-height drum room, which according to Holmes “appeared very early on in the process as our acoustic consultant Chris Smout’s way of maximising the volume of the drum room within the given footprint.”

Yet there were a number of considerations with regards to health and safety for the new ceiling, which has several microphones installed within it: “We came up with a failsafe mechanism in the control room that means we can record at different heights to hear the change in sound,” Worthington remarks. “It sounds absolutely fantastic – better than I had imagined. I think it is definitely something rather unique about what we offer here.”

Worthington’s other primary brief was for the control room to be as flexible as possible to allow for any producer to come in and apply their workflow to the studio’s gear, so it was eventually decided that lots of careful, complex consideration should go into the patch bay layouts and cabling infrastructure in particular: “Each room has mic, line, instrument, speaker and data tie lines to it, including the stairwell, store room, chill out area and even outside,” Holmes reveals. “If Joss wants to record an instrument in an area, he can. Integrating his 24-track Otari MX 80 tape machine to the system was fun too, enabling him to track to tape, mix from tape, or a hybrid combo of tape and Pro Tools.”

“We worked intensely together over the space of a year so would certainly consider them [Studio People] friends now,” Worthington adds. “All the building and wiring guys were fantastic and there were very few things that were turned down as completely crazy. It’s a very versatile space now, utilising every room as a recording environment.”

New heights
A major problem that was discovered just weeks into the build, though, was the state of the roof, which on a building over a century old in a high-risk flood area was a big concern. Following the strip-out, Studio People’s structural engineers forcibly advised the roof to be repaired as the joists and purlins were in quite bad condition.

“This inevitably put a hold on the studio build element but did allow us to design a new steel-based support structure to gain a little more height on the first floor, and revealed the building previously had skylights so these were re-instated too to allow plenty of natural daylight into the first floor,” says Holmes. “So it did have benefits over the shock of the initial uncovering of the issue!”

Three weeks after installing the new roof there was another bout of bad flooding which caused extensive damage in the area, proving the decision was the right one at the right time: “It was a big problem but I think it was dealt with in a very smart way,” says Worthington. “The new control room looks out onto the picturesque village, giving it a particular country vibe, while lots of wood finishing lends it a very natural, homely feel.”

The personal touch
Worthington has spent the last couple of months remixing a synchronisation album which is going out on EMI production music, while he also plans to welcome back The Membranes to use the new drum room: “I think that’s got a lot of people excited, especially local bands, and they’re looking forward to getting in there,” he notes.

An SSL AWS 948 Delta desk is being used in the control room, which Worthington praises for its hands-on approach and ability to integrate seamlessly with Pro Tools, while in the speaker department there are Neumann KM120s with a KH810 sub, and Genelec 1037s with 1091A subs.

The studio’s collection of outboard gear includes Teletronix LA2As, Universal Audio 1176s, Neve 1073s, as well as a whole host of API preamps and 550/560 EQs. Recording options include a Telefunken U47 – the most frequently used in Worthington’s arsenal – along with a Neumann U87, Royer 121s, and AKG 414s and 451s. For writing and MIDI-based composing he uses Ableton software, while for mixing and analogue recording he sticks with Pro Tools.

“Joss knew exactly what he wanted from the space and has a great design eye, so our design team found working with him to be very straightforward and focused,” says Holmes. “This place does not look like any other Studio People studio, and everywhere you look you can see Joss’ input.”

While Distant City Studios’ unique selling point is irrefutably its innovative new drum room, many new possibilities have been unearthed with regards to the new layout and collection of gear. “I think the whole vibe of the place is pretty unique and I’ve had lots of comments about it already,” Worthington concludes. “While there are some great studios in this part of the country and it’s a difficult industry, I’m just trying to do my own thing. I couldn’t really want much more with the space I’ve got now.” http://www.distantcitystudios.com