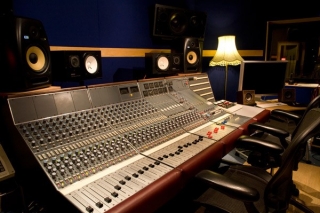 Founded in 1999 by James Stringfellow, Brighton Electric is a well-respected, high end recording, mixing and rehearsal studio complex situated just minutes away from the heart of Brighton’s city centre and train station. Spread across four premises, the studios are all within easy reach of each other, and were designed by James together with Mike Gardner (Eden Studios) and Nick Whitaker, who was brought in at a later stage to upgrade the acoustics throughout the complex.

James told us, “I started out with Â£700 and a group of artists and creatives helping out. Originally everything was residential and the studios became the creative home for many artists including Foals, Bat For Lashes, The Maccabees and Blood Red Shoes who wrote and rehearsed their first records here. Nowadays Brighton Electric is a very busy music community hub with up to fifty bands a day passing through our doors. Although there are countless talented bands out there, we are definitely experiencing an influx of musicians heading to Brighton and the South East at the moment, particularly on the acoustic side.”

As demand from acoustic and folk artists has continued to grow, the studios have begun the process of expanding their rehearsal and recording space and are about to embark on a major internal renovation of the studios. They have also appointed world-class producer Dan Swift (Aqualung, Snow Patrol, Kasabian, Art Brut) as resident producer and engineer. Commenting on his appointment, Dan said, “It’s fantastic to be working with local artists of such huge talent who are interested in exploring an acoustic, folk sound. We’re pleased to be able to offer the best venue, engineering and production expertise to artists looking to create a specific sound. The equipment here is among the best I’ve ever worked with, and my role is to create a meaningful relationship between sounds, as well as to give artists an uplifting studio experience that enhances their creativity.”

Spread over 2000sqft and taking up one ‘wing’ of the former Brighton & Hove Tramways offices, Brighton Electric’s main recording studio is a bright, high ceilinged space comprising a control room, live room, air-conditioned vocal booth, and a second live room / lounge with 12′ ceilings, natural daylight and a 1968 E100 Hammond with Leslie 145. The heart of the control room belongs to a 1970s vintage Neve 5316 console, with a wide range of mic preamps and EQs working alongside Pro Tools 10 HD and Logic Pro 9. Monitoring is via ATC SCM100As, Proac S100s and Yamaha NS10s. Mics include AKG, Calrec, Coles, Neumann, Royer, and a pair of Funkwerk Leipzig CM7156 1950s valve mics. There is also a Yamaha upright piano, a choice of over 40 guitar amps, a vintage Ampeg SVT and a choice of studio drum kits. Full equipment and mic list here.

Five minutes’ walk from the recording studio is Brighton Workshop; a purpose-built, mixing and mastering room, with acoustics designed by Nick Whitaker to create a large, comfortable and accurate monitoring environment. Pro Tools 9 HD, Logic Pro and Waves Platinum are offered together with an array of professional summing and mixing equipment. Click here or email for full current equipment list.

A ten minute taxi ride from the city centre and a short walk from the sea is Brighton Acoustic; a writing and recording retreat housed in a converted barn, set in three acres of gardens. A mezzanine-floor control room boasts a ’70s vintage Neve PSM 12 console as well as Pro Tools HD and monitoring via Genelec 1030As, Dynaudio BM15As or Yamaha NS10s. A beautiful Yamaha C6 grand piano takes pride of place in the studio’s dividable live room, and shower, toilet and kitchen facilities are also available onsite. The studio’s equipment list including mics shared with Brighton Electric can be found here. For more on the history of this unique space, check out a recent Pro Sound News article. Brighton Electric also have fifteen rehearsal rooms spread across two sites, one being Coombe Terrace and the other Melbourne Street, just 400m from the main studio with on-site permit parking available. Discover more about these spaces here.
Â Â
Over the past few months, clients at Brighton Electric have included Florence Welch, Nick Cave, Jack Penate and The Cure. Dan also recently recorded, mixed and mastered The Mountain Firework Company’s current album, The Lonesome Losing Blues which has received excellent reviews. He is currently working with Passenger (Mike Rosenberg) on an acoustic mix of songs featuring collaborations with artists including Ruby Turner and Ed Sheeran; and with Brighton’s Naomi Bedford, whose recent duet with Ron Sexsmith, Bluebirds, he also recorded.

For more information on Brighton Electric or to talk to Dan or James please contact the studios here. You can also email lex@brightonelectric.co.uk.