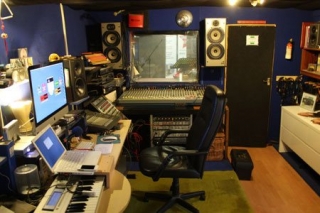 BORN IN A BARN STUDIO, WARWICKSHIRE

Established in 1996, Born in a Barn is a professional but fun residential recording studio built within the old milking parlour of Mobbs Wood Farm in the village of Antsy, Warwickshire, just north of Coventry. According to producer / musician / owner Roger Greasby, â€œThe studio has been converted over time, into an utterly unique space! The farm setting is fantastic for bands that enjoy a bit of freedom; allowing them to enjoy long sessions into the night without disturbing the neighbours. The control room has a cozy, well-equipped and professional ambience to get in the mood for making great music; and the live room is spacious and doubles up as a rehearsal room.â€

Roger started his career managing Coventry’s Cued Up Studios (a busy rehearsal studio with recording facilities for budding Radio DJs) but moved operations to the farm in 1995 whilst expanding the studioâ€™s portfolio to offer recording, tracking, editing, arranging, original songwriting, mixing and mastering for sound, plus ADR, video editing, filming and production services. He told us, â€œThe recording studio centres around Pro Tools with Waves plug-ins which we upgraded last year, advised and supported by Tom at Absolute Music. We remain primarily an â€˜in the boxâ€™ digital studio running Pro Tools 10 HD Native with Thunderbolt interface, but Pro Tools 11 is on the cards for this year. We also have a Soundcraft Spirit console available to add a bit of warmth when recording drums – or as required!

“We use Focusrite Octopre digital preamps, recommended by Dig from Musical Exchanges who told us they would never let us down; and he was right, they never have! After the upgrade we replaced the old 192s with an HD I/O 8x8x8 to keep that Digidesign pureness of sound. With 8 digital and 8 analogue inâ€™s and a live room of approx 300sq ft we are more than well-equipped to record live bands. We have cables everywhere and can put amps in totally different rooms if required, using headphones to hear the whole mix.”

â€œWe offer a range of classic and modern mics including the robust SE Gemini. The only person to ever knock it over was an Elvis tribute artist! I just watched through the windows as it went over and remember thinking â€œOh no! Elvis will have to leave the building!â€ Other vocalists to sing through this mic have been Tinie Tempah, Abigail Rhodes (opera singer / West Midlands Police Brass Band vocalist) and Sean Cannon (ex-Dubliners). Working with Tinie was special; he was so high speed!â€Â  Also included in the mic armoury are a NADY RSM-2 Ribbon mic and a Sterling Audio ST59 condenser, both imported from America. There are many other unusual instruments on display, including a Turkish Saz, a Chinese Urhu and a genuine Hualapai Tribe Flute; all collected on Rogerâ€™s travels.

Although Born In A Barn was originally designed for bands, focus has shifted a little recently to help the studio survive the tough economic climate. In 2011 the studio was extended to accommodate RantProd Music Production with head songwriting partner Tony White (ex-Supanatrals guitarist). Tony told us, â€œWorking at BB Studio is always a great experience; we have such a laugh, but the end product gets worked on tirelessly.â€ Roger has also opened up the studio for more diverse projects. They sponsor two national singing competitions, OpenMicUK and TeenStarCompetition, and have helped many up-and-coming new acts including RemedySounds, Giles Potter and Sheena McHugh (both seen on XFactor 2013) and Emily Burns to get noticed. â€œItâ€™s great being a sponsor; we’re able to help these singers a lot. I also run a service called Pop Star Party for kidsâ€™ birthdays, to fill the gaps between serious recording works. Everyone thought I was mad to allow kids in to have their parties, but in four years I donâ€™t think anything has been broken. We keep the kids busy and being able to run a disco with smoke and lasers is pretty unusual â€“ they love it!â€

In 2012 the studio produced a promo video ‘Jubilation Nation’ to celebrate the Queen’s Jubilee. Roger commented, â€œWe often write songs for special occasions and have one in production for the FIFA World Cup right now starring Little Olivia, an 8 year old girl, who has actually met Jose Marin (CBF President) and will be a part of the opening ceremony. This was a really interesting project to take on. To back up this little girlâ€™s voice, who had no front teeth at the time, we hired in some mature singers including 2013 MOBO nominee Sandra Godley, a gospel singer who weâ€™d stayed in touch with since ‘Jubilation Nation’. We also sponsor local contestants in the Miss and Mr England competition/beauty pageants and can write a song and/or produce a video for them if thatâ€™s what they want. This all started in 2011 with Jordan Williams running for Mr Coventry. Two years later he actually won Mr England. We were very impressed with Jordan who has a really strong voice and is a Buble Tribute Act as well.â€

Born In a Barn have attracted clients from Coventry to much further afield and are currently working with The Bobcats (Foot Tapping Records) on the band’s 8th album; with Darren Davies at the helm. They welcome bands/singers of any age and experience as well as video production, voiceover work and parties. Situated inside a triangle of motorways (M1, M6, M69) the studio is easy to access from any part of the country. It can comfortably accommodate up to six people staying overnight â€˜in the barnâ€™ replete with chillout space and hammock, to help clients de-stress and unwind during those â€˜heavyâ€™ sessions. There is also a hotel just a mile away if you really need to escape! As if all this wasn’t enough, Born In A Barn offer plenty of free parking; Tesco is only a mile away; and Coventry and Leicester are very close by. As it says on the doormat â€˜Come play in the countryâ€™.