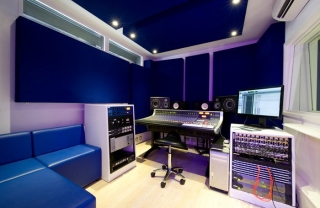 Blue Box Studios in Acton, West London, is a brand new recording studio complex located in a convenient, ground floor premises just a few minutes from Acton Central station. Built to counter the lack of available studios in the area and with experienced studio manager Nikki Affleck at the helm, Blue Box has stepped into the arena to offer a stylish boutique facility incorporating an SSL studio, two production rooms with vocal booths, and a video editing suite.

Nikki, who also secured financial backing for the project, told us, “I began managing studios in 1989 (Marcus, Nomis, Westside, Townhouse), before moving into A&R co-ordination (Sony, Universal) but as an A&R co-ordinator it was proving increasingly difficult to find good studios where my bands could write and record, simply because so many West London studios had closed down. Considering most of the major record companies are based in this area, plus many producers and engineers also seem to live in this part of town, I could see a genuine need for an affordable, high quality studio like Blue Box on their doorstep; one which not only sounds good but looks good too.

Designed by Munro Acoustics, Blue Box’s studios have been equipped with a well thought out and researched range of equipment. An SSL AWS 924 console graces the main studio together with Focal, KRK and Yamaha NS10 monitoring throughout the building. The latest Apple computers run Pro Tools HD and HDX, Logic Pro, Waves Platinum, and Avid Media Composer 6. There is a range of high quality outboard available including an Avalon Vt-747sp stereo EQ and compressor, UA 1176; Empirical Labs EL8X, Tube Tech CL1B, SSL X Rack, and Neve pre-amps and EQs plus a selection of AKG, Neumann, Shure and Sennheiser mics. All of these were selected from the wish list of a group of engineers and producers polled by Nikki to find out which equipment they most like to work with.

Nikki explained, “The focus has been to combine a high-end finish with top quality gear that is affordable on today’s budgets. Working for record labels it’s been interesting to see the business from the other side of the fence. I have a good understanding of the budgets record companies have to operate within these days, and I have steered Blue Box towards this. By offering a Munro-designed SSL studio, not only are we up there with some of the best in London, but we’ve already had so much endorsement from the people who have helped make this a reality, that I have every confidence it will be a success.”

Andy Munro agrees. “A rebalancing of economics has had to take place in the recording industry and Blue Box has got its sums right,” he says. “Their vision of providing smaller writing and recording spaces is right on track in today’s market, where the traditional recording model doesn’t generally apply any more.”

For further information about Blue Box or to enquire about booking a session, please contact the studios here.