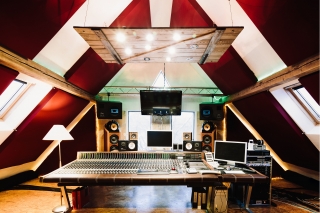 Designed and built by HOFA Akustik and owner/producer/engineer Robert Fertl in 2007, the studio complex at Auratone comprises two control rooms: Control Room A known as the SSL Living Room with an intimate atmosphere and a stunning SSL4000E/G+ Console 48/96Ch.16x E Brown Eq’s, 16x Maselec Eq´s, 8x G+ Eq’s, 8x E Black Eq’s,Total Recall and Automation with a countless number one Hit Records History as Tears for Fears, Queen and many more.  And Control Room B on the upper floor which centres around a Harrison 4032 B Original Vintage 1977 Console 48/88 Channels, 40 Direct Out, 32 Buss, Quad Out, with Allison Research Automation, (MJ, ABBA, Sade, Queen, Spliff, Nena and many more).

Robert told us, “I think the studio’s most outstanding feature is the original Harrison console, not least because it is the very same console Mack used in the ’70s and ’80s to record and mix the Queen and ELO albums he produced. We also have a superb technical spec for our clients: we offer analogue recording to Studer A820 and Studer A80 multitrack tape machines, synced to a choice of Pro Tools 10 or Logic Studio 9. Monitoring is via Dangerous Monitor ST, RTW 10800X Plus Surround, B&W 802s, Urei 809s, Yamaha NS-10Ms and Auratone 5C powered by Class A amps.

Studio B’s main live room features an acoustically optimised ceiling with original wooden beams, a beautiful wooden floor and three high stone walls able to produce a fantastic live sound. Robert continued, “Several windows look out on the rural surroundings and flood the room with daylight but you can draw the ample curtains to soften the echo and achieve a more “dead” sound. The room also houses the vintage Yamaha drum kit and our stunning Bechstein grand piano.”

On the opposite side of the control room is the second live space built entirely from wood, topped by a high ceiling for a live feel with plenty of daylight. Glazed panels set into the walls enable visual contact between the rooms and HOFA Akustik absorption/diffuser panels provide an assortment of bass traps and full range absorption.

Robert explained, “The room is a guitarist’s dream. It is filled with beautifully maintained Fender and Gibson guitars as well as amps from Fender, Ampeg, Pignose, Roland JC, Mesa Boogie, Peavy and Vox. Mics include Sennheiser, Schoeps, Neumann, Royer, EV, AKG, Shure and many others. Opposite the second live room is a good-sized isolation booth, which is perfect for vocal recording and for tracking guitars. All the rooms benefit from score displays, personal headphone mixers and a video link to the entire studio facility. Auratone’s team of in-house engineers now offer an experienced online mixing service. They welcome input from artists and understand the importance of gathering as much information as possible about how clients want a song to sound, together with a commercially released reference song, all of which help to give a better idea of the desired direction.

Clients wishing to book a session at Auratone can also take advantage of convenient on-site accommodation for up to four people, including a bright modern bathroom and a kitchen equipped with microwave, coffee machine, electric kettle and fridge. There is a recreation room and kitchen area on the ground floor of the studio complex for clients to relax in during ‘working hours’. The nearby towns of Mainburg and Geisenfeld offer a variety of eating places catering for every taste including pizza delivery for sessions that can’t be interrupted! There is a secluded private garden with a natural pond. Facilities include a barbecue area and an outside lounge for relaxing and chilling-out under a beach umbrella. The whole complex is surrounded by scenic woodland providing the perfect inspirational ambience for creative work.

For more about Auratone Studios including contact details check out their listing here.