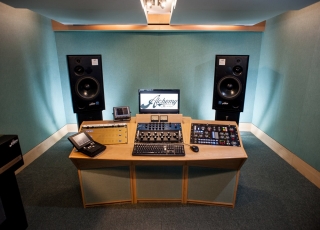 Alchemy Mastering is a high end mastering studio, founded in 1998 by mastering engineer Barry Grint. In 2003, whilst located on the 29th floor of Londonâ€™s iconic Centre Point building, and boasting outstanding views of the London skyline, Alchemy had become a firm favourite for clients both in the UK and internationally, eventually expanding to encompass the whole floor.

Unfortunately, renovation works to the Centre Point building, combined with the creation of Crossrail, led to the closure of the facility, but in 2013 the studios were relocated to an elegant mews in Brook Green, London W6. The relaunched studios now offer a boutique mastering service for digital and vinyl formats as well as duplication and watermarking, with engineers Barry Grint, Phil Kinrade and Matt Colton at the helm. There are two main mastering rooms on the ground floor and a third on the first floor, all with natural light. The rooms were designed in-house because, as Barry told us, â€œAll three of us have been mastering engineers for many years and have a very clear idea of what we are looking for from our roomsâ€. Fully networked Sequoia DAWs are standard throughout, with DAD AX24 D to A converters, and DAD, Burl and DCS A to D convertors. Other equipment includes Maselec, Sontec, Dangerous Music, Gyraf, Chord, ATC, Focusrite, KEF, Studer, Mutec and Ampex.

Barry Grint is a member of the Music Producers Guild Mastering Group and has worked with the European Broadcasting Union to standardise the embedding of ISRC codes with Broadcast WAV files. He is now aiming to standardise checksums of the audio in WAV files. Barry started his career at Trident Studio in 1984, mastering many hits for artists including Madonna, Prince, Paul Simon and Bon Jovi. When Trident closed he moved to Tape One Studios and then to Abbey Road where he mastered for Oasis and Pulp, amongst others. He then left to pursue a fleeting career in radio, before founding Alchemy. Recent work includes The Strypes, Slaves, Thom Yorke and Everything Everything. A fuller discography can be found on Barry’s Wikipedia page.

Phil Kinrade started his career as a runner at Dick James Music (DJM) in 1978 before moving into their recording studios and operating the editing and transfer room. When DJM was bought out by Phonogram, Phil founded the Sound Basement with Murray Harris, offering mastering and duplication. Phil explained, â€œThis is where I first met Barry. Digital audio at that time was recorded onto U-matic tapes, but we didnâ€™t have a player, so we would send them to Barry at Trident to transfer for us. Barry would also often cut the vinyl masters for releases that Sound Basement were cutting the CD and cassette masters for. Particularly for labels such as Chrysalis, Arista, RCA, MCA and IRS. Then in 1990 we joined Chop Em Out until the Sanctuary buy-out in 2000, at which time I came to Alchemy.â€ Philâ€™s recent projects include: The Beat, The Fall, Nick Cave, Donna Summer, Bill Wyman, Chairman of the Board, Northern Soul 2014 film soundtrack, Belinda Carlisle, Plebs TV series, Trojan soundtrack, Desmond Dekker, Status Quo, John Power, Eddi Reader, Cerys Matthews, The Sound and lifetime box sets for artists such as Leo Sayer and Showaddywaddy.

Attending a session at Alchemy is remarkably easy. There is parking available right outside the door and great transport connections to Hammersmith and Shepherds Bush underground and overground stations. However, for international clients or for others unable to attend their session in person, Alchemy offer unattended mastering sessions too. To enquire about bookings for Barry or Phil please contact Lesley Scott at lesley@alchemymastering.com and for bookings with Matt please contact Charlie@alchemymastering.com. Alchemy is at 10 Barb Mews, Brook Green W6 7PA. Telephone 020 7348 0010.

For more information on the studios visit their listing or Facebook page.