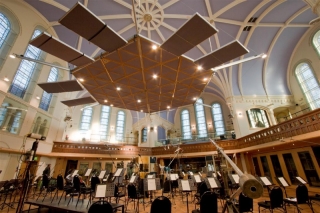 Courtesy of Jim Evans on behalf of Audio Media International
In August 1965, Associated Independent Recording (London) Limited, or AIR for short, was created by four leading record producers – George Martin, Ron Richards, John Burgess and Peter Sullivan; producers who, between them, were responsible for the success of some of EMIâ€™s and Deccaâ€™s top acts, including The Beatles, Tom Jones, Cilla Black, The Hollies and Lulu.

Once free from the shackles of the majors, the newly-liberated producers continued to work with these acts, but now with the added benefit of royalty payments which, as salaried employees of the labels, they had not been accustomed to receive. The nascent AIR was based in offices on Park Street in Londonâ€™s West End with the plan being to eventually build their own studios. By 1967 the group had earned enough royalties from these new production deals to finance the venture and, eventually, premises were found in Oxford Street on the fourth floor of the Peter Robinson department store building, which included a large banqueting hall.

It would prove to be not the easiest of places to build a recording studio, not least “because the rumble up through the building from the Underground was drastic, and dramatic.” Nevertheless, the studios opened for business in October 1970. Dave Harries, previously with Abbey Road and now consultant to Mark Knopflerâ€™s British Grove Studios, was one of the first to leave EMIâ€™s employment to join the new venture. He would go on to manage the Oxford Street studios for more than 20 years.

The original four producers were also joined by a host of other top producers and engineers, each bringing in their own work and signings that would add to the success of the studio. These included Chris Thomas, Keith Slaughter, Bill Price, Geoff Emerick, Jon Kelly and John Punter.

â€œIt was one of the noisiest places you could choose to build a recording studio,â€ says Harries. â€œWhen Geoff [Emerick] first showed me the pictures at Abbey Road I said that simply canâ€™t work. It will never work. But work it did! It became so successful that George and John who had built it primarily for themselves couldnâ€™t get in there and had to go back to Abbey Road. We were certainly one of the pioneering independent studios â€“ and among the first to go 16-track. When we opened, our studio rates were Â£35 per hour.â€

So why did AIR Studios take off so spectacularly? â€œThe main studio was actually quite large and had a quite live sound,â€ Harries continues. â€œThe idea was originally that we would do film scoring in there, with the smaller No. 2 studio which had a much drier sounding aspect and was built for pop. They both had basically the same equipment in the control room. As it turned out, the main room for a number of reasons, including its great drum sound, got booked out by bands. It just worked. Film people couldnâ€™t get in. We had good equipment and good technicians. We were in the right place at the right time.

â€œI recall one occasion when we had The Rolling Stones, Paul McCartney, Dire Straits and Slade booked into the four studios. I walked into reception to see McCartney, Mark Knopfler, Noddy Holder and Mick Jagger deep in conversation. Sadly, a camera wasnâ€™t to hand. But then, we never really boasted about who was here, we just got on with the business of making good recordings.â€

Among the sessions at AIR, Harries has fond memories of many â€“ including a young Kate Bush recording what would become her debut album.

â€œJon Kelly was the engineer and Andrew Powell was the producer and arranger. They were in Studio 2 next to my office when I heard this wonderful sound. It was Kate doing the guide vocal for Wuthering Heights. My hair stood on end. I said at the time it would be massive â€“ and it was. Over the years we changed with the times, upgraded the technology as fashion dictated. Despite being â€˜lifelongâ€™ Neve supporters, we went with the flow and bought SSL desks. We were at the forefront of digital too.â€

Twenty-two years after the opening of the Oxford Street studios, the lease on the Peter Robinson building expired and the next chapter of AIRâ€™s colourful history began. The studios moved to their present location in the beautiful Lyndhurst Hall in Hampstead, North London. Heavily involved in the design and building of the new studio facility, Sir George Martin opened AIR Lyndhurst in December 1992 with a gala performance of Under Milk Wood in the presence of HRH The Prince of Wales.

In February 2006, the Strongroomâ€™s Richard Boote announced the purchase of AIR Studios from the Chrysalis Group and Pioneer. Since that date AIR Lyndhurst has continued to be one of Britainâ€™s premier scoring facilities, attracting some of the worldâ€™s biggest movie scores, as well as maintaining its popularity with major classical labels, high-profile recording artists and incorporating TV post production facilities.To find out more about AIR Studios, visit their website www.airstudios.com. Please also read Jim Evans’ complete feature here and our related article Air Studios Under Threat