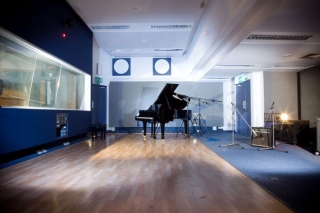 Air-Edel Studios, situated just off London’s famous Baker Street, has a long history of recording both bands and film scores. Originally built to serve as the meeting hall for the Theosophical Society, the building was converted into Star Sound Studios in 1937 and has been carving out a niche of its own ever since.

Studio Manager Tom Bullen told us, “At first the studio specialised in cutting live performances to wax disc, for broadcast on Radio Luxembourg. However, in 1949 it went on to secure a place in UK studio history by recording the first full-length live radio programme to magnetic tape. By the late ’60s it had become a commercial recording studio under the name of Audio International, the source of many hits throughout the ’70s and ’80s by artists including Gilbert O’Sullivan, The Sweet, Tom Jones, Mud, Suzi Quatro and Sheena Easton. In 1990, Air-Edel Associates, a film and television music company, acquired the studio and began recording and mixing music, synchronised to picture, for commercials, television programmes and finally for film scores for Hollywood blockbusters (see client list below). It has also recently expanded into the world of orchestral overdubs.”

Tom continued, “After decades of experience, Air-Edel is one of the best studios around for the types of overdubs not suited to traditional studios. Lately, many top producers have been bringing their projects here to track strings, grand piano, woodwind and brass as well as choirs. We are fast gaining a reputation of being a well spec’d medium-sized central London facility with a flair for this type of recording.”

With its central London location, a sizeable live room able to accommodate over twenty musicians and a large collection of equipment built up over the years, Air-Edel is an exceptionally versatile studio, attracting sessions from all areas of the music and audio industry, whether rock, pop, film, TV, radio drama or spoken word.

Studio One’s control room centres around a perfectly maintained Cadac console with Uptown automation, installed in the late ’80s. Dynaudio 5.1 monitoring is complemented by a selection of nearfield monitors including NS10Ms. There is a Pro Tools HD3 rig with 24 inputs and 40 outputs and a huge vintage microphone collection that boasts three valve Neumann U47s and an all-original AKG C12; a Steinway B grand piano and some sought-after outboard including Urei 1176s, Neve 2254/As, three EMT 140 plate reverbs and a TC 6000 MKII reverb are just a few more toys to whet your appetite. Click through and scroll down for a full equipment and mic list . The smaller Studio Two is a perfect room for overdubs, writing and spoken word recording. This room features a Toft ATB16 console, Focusrite ISA 430 MkII channel strips, Pro Tools HD and Dynaudio monitoring. Both the vocal booth and the control room have large windows that let in plenty of natural light and ensure that even the longest sessions remain pleasant.

Recent music clients at Air-Edel include Emeli SandÃ©, Andrew Lloyd Webber, Leona Lewis, Madness, The Rifles and Biffy Clyro. Film, TV and advertising clients have included Cadbury’s Creme Egg, Jacob’s Club, ‘Where The Heart Is’, ‘Stay Lucky’, ‘Outside Edge’ as well as mixing sessions for ‘Thor’, ‘My Week With Marilyn’, ‘Agora’, ‘Cracks’, ‘Black Death’ and recording and mixing sessions for ‘Another Year’ and ‘Gosford Park’.

For further details about Air-Edel or to enquire about booking the studio please click through to their listing here.