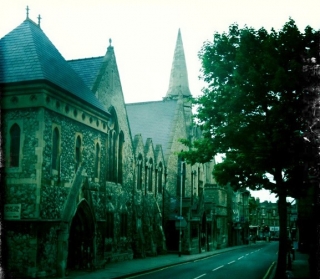 “With its wooden floors, high ceilings and esoteric musical detritus, The Crypt is one of those studios that makes you feel comfortable straight away! It’s the sort of place that simply lets you be as creative as you want to be. Oh! and that drum sound kicks ass!” Chris Sheldon (Mixer/Producer)

Based in a large 19th Century church in the heart of North London’s Crouch End, The Crypt Studio started life as little brother to the famous Church Studios, founded by Dave Stewart (Eurythmics) in the late ’80s. Shakespear’s Sister recorded their debut album ‘Sacred Heart’ here, and throughout the ’90s the studio was used by Stewart’s Anxious Records as a demo studio for acts including Freaks Of Desire, Rachel Stamp, Antacid and Capitol K.

Current owner Ricky Barber took on the running of the studio in 1998 and has helped it evolve from a personal project studio into the thriving commercial studio it is today. He told us, “Over the past fifteen years, The Crypt has hosted sessions for some amazing artists including Feeder, Eagle Eye Cherry, Battles, Dirty Pretty Things, Madness, Michael Kiwanuka, The Staves, Travis, British Sea Power, Benjamin Francis Leftwich, Lucy Rose, Wretch 32, and Cults … to name just a few!

“The studio blends modern and retro equipment and is designed to handle all audio and musical needs. Windows run down the length of one side spilling plenty of daylight into spacious rooms. The recording area comprises a 132 sq ft live room and isolation booth, with high ceilings and wooden floors giving it that distinct “Crypt” sound, perfect for recording strings, bass, drums or a full band set-up. The live room can also be used as a rehearsal space or for shooting video. In fact, we provide a huge range of services here, including mixing, mastering, ADR, foley, sound design, bespoke composition and more.”

In 2009, Ricky went on to launch The Crypt Sessions: an online music channel featuring live sessions from up-and-coming artists which has raised awareness of the studio worldwide. Now an established music blog, TCS currently has over 3 million views on You Tube and is a respected music brand in its own right. Recent partnerships include The Selector â€œAmpedâ€ Sessions, Daytrotter Sessions and US-based content creators The Wild Honey Pie.

The Crypt is also often used by labels and bands for filming, and The Crypt staff are well used to working with camera crews and across all areas of audio post-production (bespoke composition, re-records, sound design, 5.1 mixes, voiceover recording, music library and much more) which can be provided in-house by Bleach Productions.

Situated in the heart of this creative area of north London, the studios offer easy access to public transport, bars, restaurants and shops. Alternatively, a private kitchen and lounge areas with TV, DVD, and wireless broadband access are provided for clients. For more information about The Crypt Studio including contact details check out their listing here